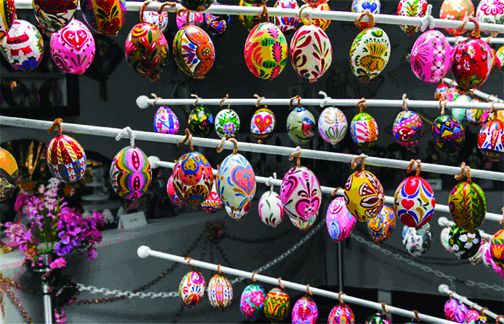 With a nod to spring, Easter, and egg-headed Presidents, from George Washington to George W. Bush, the Schoharie Free Library has an eggs-traordinary month of eggs-citing egg-vents planned for April, beginning with the reopening of the one-of-a-kind Schoharie Easter Egg Museum.
The eggs-cellent fun will include a bedtime reading of Katherine Milhous’ “The Egg Tree,” the story that inspired museum; an Easter egg obstacle relay course at the Schoharie Firehouse, and an Easter egg hunt in Lily Park—to name a few.
All of the eggs-ceptional fun will revolve around the reopening of the Easter Egg Museum weekends in April with admission going to the library.
“It’s going to be eggs-tream,” said Laura Rosenthal, a library trustee and one of those who’s been working to put together the eggs-plosive celebration for the past year, consulting her list of egg puns and admittedly working them in every chance she gets.
“It’s going to be quite an eggs-vent.”
Schoharie’s Easter Egg Museum was the creation of the late Mildred Vrooman and Elizabeth Warner.
Begun in 1953 and exhibited at the library in the 1960s, the collection of more than 3,000 hand-painted eggs eventually outgrew that space and was moved to a small building put up next to Ms. Vrooman’s home at the end of Covered Bridge Lane in Schoharie before finally shutting its doors in 2004.
In 2013, Joseph and Berna Heyman—Ms. Rosenthal’s parents—bought Ms. Vrooman’s home and with it, the museum.
And though they’d expected the collection, which features eggs as nursery rhymes and stories and even as the Last Supper with all of the disciples eggs; eggs as Presidents and circus scenes; eggs that are bejeweled, carved, and decorated in mosaics--to be sold when Ms. Vrooman’s estate was settled, it ended up being quite an inheritance, Mr. Heyman joked, and an act of providence, added his wife, herself a retired librarian.
“We are quite proud of our community,” Mr. Heyman said. “Schoharie is such a unique small town…the flood, the accidents…it just brings people closer together.
“And this museum, with all of the stories and memories that it generates, is a unique piece of history and we’re glad to be a part of it.”
The Heymans last opened the museum to the public in April 2014 to help the library rebuild from the devastation caused by Hurricane Irene.
More than 3,000 people visited.
They’re expecting an even bigger crowd this year, in part because the list of egg-vents is so much more eggs-tensive.
“We really reached out to the community to get as many people as possible involved,” Ms. Rosenthal said, “and I think the response we got reflects what a wonderful village we have and their love of the library. It’s been a lot of fun to put this together.”

The Schoharie Easter Egg Museum will be open from 10am-5pm on three weekends: April 5-7, April 12-14, and April 21 (opening at noon on Easter) and by appointment during the week for groups.
Admission benefits the Schoharie Free Library.
Throughout April, downtown businesses and school and community groups are all expected to decorate the village with an egg theme for the eggs-vent, and there will be raffles of egg art by local artists.
Eggs-cellent programs at the library will include:
• Special story hours at 10am Fridays with an eggs-tra special STEM story with eggs-periments on Friday, April 19.
• April 4, 6pm, a bedtime reading of “The Egg Tree.”
• April 11, a Cornell Cooperative Extension talk on how an egg grows into a chick, followed by a discussion, starting at 6:30pm.
The library will also be incubating and hatching chicks.
• April 13, a Ukranian egg-decorating demonstration at 10:30am.
• April 18, a PJ and popcorn movie night showing “Rise of the Guardians,” at 6:30pm.
Elsewhere in the community, the eggs-citement will also include:
• April 6, an Easter Egg Obstacle Relay Course at the Schoharie Fire House, starting at 10am.
• April 10, Joseph and Berna Heyman, owners of the museum, will give an illustrated lecture of the history of the egg collection at 7pm at the Old Stone Fort.
• April 13, the Schoharie Promotional Association will host an Easter Egg Hunt in Lily Park, just across the covered bridge from the museum, at noon.
Also on the 13th, the Old Stone Fort and the Schoharie Colonial Heritage Association will host an artisan show and sale and children’s craft activity.
For more information on the eggs-travaganza, email Schoharie.easteregg@gmail.com or go to SchoharieEasterEggMuseum on Facebook.