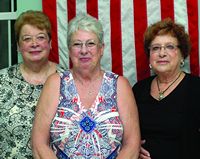 The Sharon Historical Society has welcomed home a piece of its past:
The bell from St. John’s Lutheran Church—not only Sharon’s oldest church congregation, but also Schoharie County’s.
For years, after the church’s tower and bell were removed, Sheila and Fred Coager, members of the St. John’s congregation, had stored the bell in their basement.
The church has been sold, and as a way to help the Historical Society close out its spring series of meetings, the Coagers dusted off the old bell in 2016 and donated it.
It’s now on display at the Main Street Museum Complex.
The bell was dedicated June 19 in a ceremony moved inside to the library’s Community Room because of weather.
SHS President Mary Ann Larkin welcomed about 30 people to the dedication ceremony, which recognized the Coagers, and SHS vice president, Town of Sharon supervisor, historian, and author Sandra Manko shared a history of St. John’s Church.
According to Ms. Manko’s research, the church was founded in 1745 at Beekman Corners by Rev. Peter Nicholas Sommer, “who was well-known for his Christian leadership ability and his instilling the faithfulness of his parishioners.”
Rev. Sommer died in 1793 and was buried in the Beekman Cemetery before being moved to the old Lutheran Cemetery in Schoharie.
His direct descendants include Ms. (Lane) Manko as well as Helen (Paris) Roberts; Ms. Roberts and her daughter, Karen Roberts, along with Karen’s son, Levi, were all baptized in the church--Levi being the last baby baptized there—and all were on hand for last Monday’s dedication.
John Burr, another longtime member of the congregation, was also on hand; he remembered many Sundays of ringing the bell.
And I remember the dust and feathers coming down every time I rang it too,” Mr. Burr said with a laugh.
Two different St. John’s Lutheran Churches were built in Beekman Corners, Ms. Manko said, the first in 1787 and the second, existing one, in 1861 from material salvaged from the original church.
It’s believed the belfry and bell were added about 10 years later.
The church is unique in part because members of the congregation discovered Greek Revival-style frescoes underneath several layers of wallpaper in 1995.
“Since the paintings of Greek columns didn’t have any apparent tie to Christianity, the congregation was divided over what to do with them, so they were left as they were,” Ms. Manko said.
Some think they were likely the work of an itinerant painter, she added.
In 1984, St. John’s of Sharon and Zion of Seward became “sister” churches and then in 1997, as the result of a dwindling congregation, the two consolidated; the last service in Sharon was held July 10, 2011.
The bell is now on display outside at the SHS’s Museum Complex; the museum is open Friday-Monday, 1-3pm, in July and August and during the Sharon Springs festivals.